Ok, I have to confess a bias here before I start.

Thomas Blug is a German guitarist, who has for the last couple of decades, built a reputation for having one of the best Guitar tones in the business.

He’s also been a mate of mine for a long long time.

We met first at trade shows in the early ‘90’s when I was demonstrating Takamine and Parker guitars, and he was demonstrating for Hughes & Kettner amps (for whom he was hugely important in the development of their sound)

Later, the company I worked for, took over the distribution of Hughes & Kettner, and Tom and I worked together on sales and demo’s for the UK.

So I know him as an old friend.

I also know that he has 2 of the best ears in the business.

This guy really does know about guitar tones.

So when he announced he was coming to market with what appeared to be a pedal, I was intrigued. 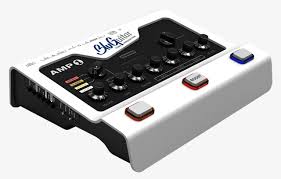 But I needn’t have been, you see,

In fact it’s all amp.

In fact it’s a fully functioning 100 watt amp head, that you can attach straight to a 4 X 12 cabinet and make a proper racket with.

Light, Portable and efficient, yet capable of generating a full 100 Watts of blistering tone, this amp is at home either on stage or in the studio.

The first time I heard it in the studio, I immediately removed all the other Amps, Amp sims, modelling units etc, because this, is the best I have ever used.

Don’t get me wrong, I love using my UA plug-ins for mixing down, but when it comes to tracking, there is nothing to beat a real amp.

And remember, it’s not just for the studio, it sounds unbelievable live too.

Each of these is switchable and has adjustable Boost and Reverb controls.

The amp also features a Killer speaker simulation output for use in the studio as well as a headphone out.

This tiny package, that can fit easily into Hand luggage or a gig bag, delivers a round, fat bass with crisp, non ‘tinny’ trebles and an overall tone that you’ll recognise immediately as that of a true modern, boutique amp.

Why not give us a ring and arrange to come and demo one in our new ‘Blue Room’ demonstration suite.