Intel’s latest chipset has recently launched and the Z170 series or Skylake as it is informally known, is a refinement of the earlier Broadwell range launched last year. The Broadwells were most notable for bringing 14nm processors to the market, althrough these CPUs tended to be lower powered solutions and so didn’t register all that much on the enthusiasts radar

Of couse the is nothing wrong with lower powered solutions and the lower heat is always great especially if you want a low noise system to work with, but the for those who also required large amounts of performance the Broadwells were simply not all that attractive, with many of us who were simply looking for the very best performance at a given price point, choosing to stick with the Haswell platform from the generation before, as it simply offered up the best bang per buck solution.

So with that in mind, we’ll take a look at overall performance using the trusty DAWBench test and see how it all stands, along with consideration being given to both upgrades and new machine senarios.

We’ve discussed DAWBench a number of times over the years with the last time being our start of year round up. As this is a quick test to see how the new chips hold up, if you’re not already up to speed, may I suggest checking out the last time we visited this and it should give you a quick grounding before we dive in.

You can find that testing round here.

Give the image below a click and you can see our test results.

So this time around we’re testing 2 CPU’s with those being the i5 6600K and the i7 6700K. This time we’ve benched them in two different states where the lower clock speed is CPU at stock clocks with the turbo locked on at 100% of the advertised turbo clock speed and the second test shows the CPU in question being overclocked up to 4.4GHz setting that we supply our systems at.

When the overclock option is selected it should allow us to see what sort of difference the overclocking process can make, which in turn shouldl also help measure us measure the new chips against some of the older CPU scores where we’ve also worked with similar overclock figure. Also be aware we keep our overclocks on workstations rather minimal choosing to get the best out of chip, rather than push it to its limits.

This means that we don’t ramp up the voltages and generate the heat that comes with higher overclocks often seen on the gaming systems, which also have fast fans and noisey cooling in order to compensate, which of course would be completely unacceptable in a recording studio environment.

Starting with the i5, well it pretty much returned the performance levels matching the older 4790K chip, with a small performance boost showing up at the very tightest buffer settings, which admittedly is always a very welcome bonus. As a new replacement for the older chip, well it keeps the value the same whilst giving you access to the other benefits of the platform, so as a new build these should all prove most welcome additions, although as an upgrade from an older i5 it’s going to be harder to justify.

Of course if you are looking to upgrade in the midrange then the i7 option will possibly make more sense anyhow and this is where it gets a bit more interesting. The good news here is that we see both a slight power saving over the older 4790K with roughly 10% more performance increase clock for clock over that older 4790K, which was best performance crown around the midrange until the launch of these new chips.

As I’ve already touched upon briefly, Skylakes main selling point has been the other features it introduces to the mainstream. The boards we’ve seen are offering more M.2 slots which in themselves offer transfer speeds in excess of 4 times those speeds seen on current SSD’s. Some boards are also offering the ability to hybrid RAID them PCIe based add in cards too, meaning that if your tempted then this platform will offer up some truely amazing data transfer speeds that could transform your time in the studio if you work with large sample libaries and templates like some VSL users.

Additionally USB 3.1 and USB type C are now native to the Z170 chipset and this standard is only going to to grow over coming years, so early adoptors, this is your platform. It’s also the first time we’ve seen DDR4 in a mainstream setup and for those working with video editing on the side, the extra bandwidth will prove beneficial to some extent. AVX 2 instruction improvements to CPU’s may also prove beneficial to multimedia applications in the future, although these tend to impact CAD & Video software mostly, some plug in manufacturers or even DAW coders may eventually chose to leverage these instruction set improvements in the future.

All this as far as building a new machine is concerned is great as any improvement for your money is always going to be a good thing. For those looking to upgrade older machines however, the small incremental improvements mean that anyone who currently owns a CPU from Ivybridge upwards is going to be hard pressed to get a justifiable upgrade by going for a more modern equivalent although the are certainly some improvements are there if your hand is forced into a new setup due to aging hardware reaching the end of its lifecycle.

For those users with more recent machines however that do require an upgrade path, the X99 platform offers a very attractive upgrade option right now, offering a solid bang per buck for those needing more performance from their system. Also worth noting is that with the extra cost caused by the Z170 platform moving to DDR4 and indeed DDR4’s ever decreasing price points, the enthusiasts X99 setups are now starting to reach price points less than a hundred pounds more than the mid-range brethren.

This all means that the X99 may offer many users more value for money overall long term and should certainly be considered by anyone considering a new studio solution at this time, if they are looking to get the longest lifespan they can from a new machine setup.

Native Instruments this week brought their much anticipated “Stems” format to fruition, with a dedicated site launched to support this exciting new format. To help celebrate its launch, prices have been dropped on a number of controllers that are ideal for getting to grips with all the creative possibilities this new track format can offer.

What Is A Stem File?

The Stem file container collection opens up whole new ways as a Dj to play with your music. The Stem file at its most basic has a regular stereo copy of the file encoded into it, which allows for playback in a set just like any other. What makes it special however is that within that file is also encoded 4 “stem tracks” which allow you to disect the mix in various ways when playing with it in your set.

In the studio its normal to process groups of similar sounds in stems to ensure a quicker work flow at the mixdown and mastering phases. It gives a broader scope of control as well as allowing the producer the chance to make the individual tracks to gel together better through added group effects. Normally you would expect to see the drums get a stem mix and then perhaps vocals in another and lead sounds in yet another.

With this new Stems format Native have taken the this well proven production methodology and given the flexibility it offers to the end user, allowing a DJ to create mash ups and mixes in ways previously unimagined.

You want to mix the vocal from track A, with the drums from Track B, Synths from track C and Bass from track D? Now you can!

Who Can Create Stem Files?

The stems format is an open file format and Native Instruments have created free tools to allow anyone to create their own stems mixes without paying licensing fees which can then be distributed via your own service of choice. 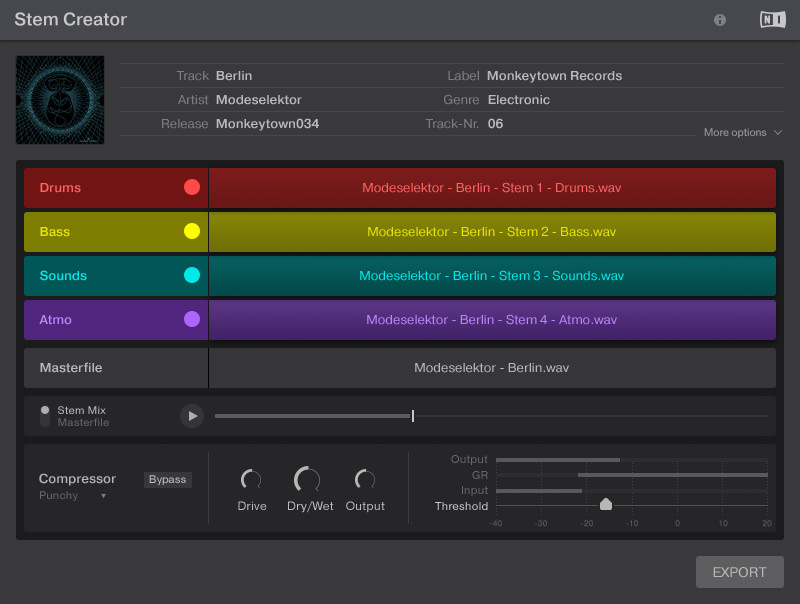 Allowing a total of 4 stem tracks per mix you can give your listeners the ability to remix and interact with your music in amazing new ways.

For more information on creating your own files and more on the Stems creation tool take a look at Natives own information page.

As A Dj How Can I Get To Grips With Stems?

At launch a whole host of labels have already announced a number of releases in this new format, with the genres involved crossing the length and breadth of the dance music spectrum and many more are surely to follow. A number of digital stores such as Beatport & Juno have also confirmed they are amongst the initial half dozen launch stores involved and this will surely only grow over time.

From the off Native Instruments own Traktor is the first Dj software to support Stems natively, but with the file format being open to use without license and developer tools coming shortly, we should expect to see more update across other Dj software platforms if popularity grows and it becomes and essential feature and up until that point the master stereo file can still of course be played back if you find yourself mixing on a unsupported mixing package in the meantime.

The files themselves are based around the .MP4 container framework and the internal Stem files may be encoded in either AAC 256kbps VBR tracks or Apple Lossless Audio (ALAC). Windows 10 is the first PC based OS to fully support the ALAC format natively, althrough on older editions of windows if your DJ package supports it as Tracktor does or it is possible to install some third party codec packs to handle the format in your regular media player of choice.

So the big release on the software front to support all this is Traktor 2.9.0 which brings the support for the format to all the Traktor users who have been awaiting it. The ideal way to play and control Stem tracks will be with the Traktor Kontrol D2, Kontrol S8 or a Kontrol F1 along with Traktor Pro 2. The Kontrol S8 and Kontrol D2 have the added advantage of colored screens so DJs can actually see the individual stem waveforms split across the display.

These controllers along with Traktor 2.9.0 are all plug and play with controls natively mapped to the Stem Decks for you and ready to take full advantage of these new tracks. These devices aren’t the only way to control them as the Stem decks will be fully mappable to any MIDI controller so this could open up whole new ways of using your favorite controller.

If all this prove popular and other software and hardware developers choose to follow with added Stem support in the future on other DJ software platforms, this would make the Stem format a huge win for DJs/producers.

For a limited time in celebration of this new advance in Dj’ing, along with Native Instruments we are offering a discount on the ideal controllers to take your performances to the next level. Until the end of September only the price of the Kontrol S8 has been dropped to £699, the Kontrol D2 is down to £279 and the Kontrol F1 is superb £99.

For all the Native Instruments controllers and software at Scan click here.