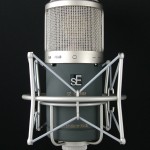 If there’s one thing that sets SE mics apart from anyone else in todays crowded marketplace. It’s the fact that Every single SE Mic is built by hand.
Now, in this day and age, that is really saying something, especially at a time when China is capable of turning out some very effective and very cheap alternatives.
So why do SE insist on this stance of hand-building everything?
Because their Goal and Aspiration is to be the next Neumann.
And that is a Heck of an ambition.

sE Electronics condenser mics are already the No.1 brand in the UK and the fastest growing microphone brand in Europe and the USA. The brand, in its short history, has already won almost every major European award possible for excellence and is fast finding the same unanimous acclaim and passionate following in the USA and Asia that it has in Europe.
All sE mic capsules are entirely built by hand by highly-skilled engineers. Even the chassis and flight cases are built in-house. In fact when you own an sE Electronics microphone you can be confident that every aspect of both the mic and its accessories has had the same unrivalled level of care and passion right throughout its design and manufacture. Even to the level that every single microphone that leaves the facility has undergone a personal listening test — and it shows.
Here at Scan, we have long held the belief that if someone takes the time to create something better than the rest, then we should get behind it and support it as well as we can.
Over the next few weeks, we are looking to construct a special listening room, where anyone interested in buying a microphone or a reference monitor, can come down and try them out in a purpose built room. That way, we’ll be able to help SE microphones prove their point.
Watch this space!! 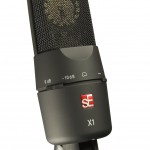 Bluguitar AMP1 Nanotube 100 Guitar Amp Ok, I have to confess a bias here before I start. Thomas Blug is a German guitarist, who has for the last couple of decades, built a reputation for

The Portable Ideas Machine……Korg Kross   OK, It’s got a Mic input to go with its built in Stereo Audio recorder to capture and overdub your vocals or guitars… It has a ton of stock