Softube Console 1 is a major surprise for us. Every Musikmesse, something brand new and innovative comes around that we were not expecting and this year, i think it’s this.

Rather than producing a DAW hardware controller (such as the Stienberg CMC’s or Presonus Faderport), Plugin developer Softube (Tube-Tech CL1B / Pultec EQ, Trident A-Range Plugins) have unveiled a hybrid hardware controller, complimented by a “virtual analogue” mix environment. I cetainly think they are on the right track, with the rubber coated knobs and quick access buttons all showing a rugged, ergonomic layout. If the quality of thier existing Plugin’s are anything to go by, then the built-in Dynamic and EQ controls should be of the highest calibre, the GUI looks fantastically minimal and easy on the eye for long mix sessions. The mix environment can be used with any DAW and supports VST, VST3, AU, RTAS, and AAX Native Plugin connections.

Initially Mac OS only with hardware parameter control limited to softube plugins, with Windows support to follow, Console 1 should be available in The Autumn, price TBC.

A world-class model of an analog mixer channel paired with a hardware controller. Console 1 is that, and more.

Sound. Workflow. Control. Softube Console 1 is an integrated hardware/software music mixing solution which includes a rugged hardware controller and a modeled analog console channel with some unique additions. Use the system with any major DAW and enjoy the biggest advantages from digital and analog mixing environments—plus a few new ones. 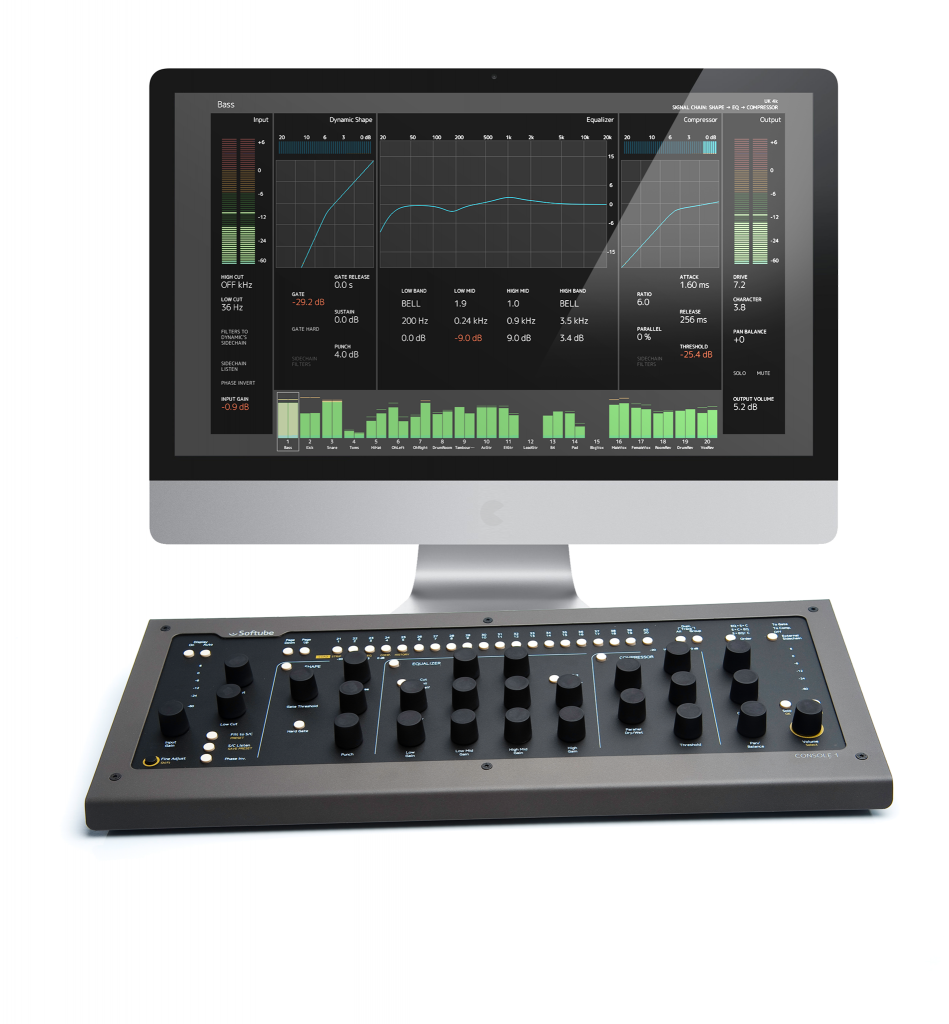 The software
Inserting the software on any or all mixer channels of your DAW gives you a full-featured channel strip per channel. Included in the purchase is UK 4k, a new model by Softube of an analog console. UK 4k perfectly mimics the sound of a well-known British large format console, used on countless records from its introduction in the late 1970’s and onwards.

The channel strip is divided into sections, and not only does it include the world famous four-band equalizer and compressor from the modeled console, but there’s also the Drive section which models analog console saturation. And then there’s Dynamic Shape, a unique processor that combines expander/gate and transient shaper functions. Plus a few more useful functions to help you make great mixes.

For further sonic variation, you can customize each channel separately by adding in any Softube equalizer or compressor. This works, because one unique aspect of the Console 1 software is that it’s a plug-in that can contain plug-ins!

The on-screen display gives you perfect and detailed visual feedback and metering of all effects settings and channel levels. But if you prefer an analog-like workflow, the hardware gives you all the visual feedback you need.

The hardware
With Console 1, it’s entirely possible to mix a song from beginning to end and not even look at the computer screen. Intuitively laid out, the sturdy Console 1 hardware puts you in direct control of every aspect of the Console 1 software. True to the analog workflow, most knobs and buttons are dedicated to a single function and very few functions require combining several controls. The LED meters give you immediate visual feedback of your gain structure and the processing performed by the dynamic effects. And the LED circles around each knob let you see that knob’s current position. Still, if you prefer the more detailed feedback the on-screen display gives you, you can toggle it on and off with a dedicated button on the hardware. Or use the Auto mode, and have it pop up every time you change a setting on the hardware and then fade away after a few seconds.

The hardware offers some useful extra functions, such as the ability of grouping any or all channels to tweak the settings simultaneously across the group, and changing the order of the effect sections. The hardware is USB powered, so no extra power supply is necessary.

Softube’s Console 1 was built to be a straight-forward and intuitive solution for music mixing. Nevertheless, there are a few things that are new about the concept and may need to be cleared up. So here you go—questions and answers on Console 1!

What is Softube Console 1?
It is an integrated hardware/software solution for music mixing. The software part gives you a full-featured mixer channel strip that you can insert on any or all mixer channels in your DAW. The hardware gives you physical control of that channel strip, not just the effects settings but all aspects of it.

So it’s a DAW controller?
No. The hardware doesn’t affect any of your DAW’s settings or functions. The software part of Console 1 lives within your DAW, and the hardware only controls the Console 1 software with its loaded effects. To get full control of your mix, we recommend that you insert the Console 1 plug-in on all the mixer channels of your DAW.

What software effects are included?
With the purchase, the Console 1 software comes loaded with UK 4k for Console 1, a brand new Softube model of a mixer channel from a classic large-frame British console from the late 1970’s. The mixer channel is sectioned into an equalizer, a compressor, Dynamic Shaper and Drive—a model of the saturation you get from running the signal through the analog circuits, with adjustable intensity and character. There’s a few nifty extras, too.

What is Dynamic Shaper?
It is a unique combination of an expander/gate and a transient shaper. This was not a part of the console we modeled for UK 4k, it’s a Softube invention you will only find as part of Console 1.

What else is included in the software package?
The input section has sweepable high and low cut filters that can be set to affect the audio signal or the sidechain of the dynamic effects. There is also a polarity reversal switch and an Input Gain knob. In the output section, you have Pan and Volume knobs, plus Solo and Mute switches. You can change the order of the sections, if you for example prefer to put the compressor before the equalizer in the signal chain, and you can group any or all channels to tweak their settings simultaneously. Everything is controlled from the hardware and almost all functions have their own dedicated switches or knobs.

Does that mean I can only use the included software effects?
No. One unique and innovative aspect of the Console 1 software is that it works like a plug-in that can itself contain plug-ins. Therefore, you can customize each single mixer channel by loading any Softube equalizer or compressor into the corresponding section of the Console 1 software, and then control it from the hardware. Softube will also release more excellent models of high-end analog consoles for Console 1 in the future, that can be purchased separately.

How do I know what settings I have made?
The on-screen display gives detailed visual feedback on all settings and functions of the Console 1 system. The on-screen display can be set to different views and there is a dedicated toggle on/off button on the hardware. You can also have it automatically pop up as soon as you change a setting on the hardware. But the LED meters and rings around the knobs on the hardware also give you plenty of visual feedback, so it’s possible to complete an entire mix without watching the computer screen at all. Working like this, you don’t only get the sound of the classic analog console, you also get an analog-like workflow.

Is the Console 1 software and its effects DSP powered from the hardware?
No. All signal processing takes place within the computer. The hardware only controls the software and has no built-in processing power.

What operating systems does the system support?
MacOS only at the time of launch, Windows support will follow.

How do I connect the hardware to my computer?
By a standard USB connection. The hardware is USB powered, so it has no extra power connections.

Do I need an iLok to run Softube Console 1?
No.

Can I run the Console 1 software without the hardware connected to the computer?
Yes, but you can not make any changes to the settings.

Can I use other manufacturer’s plug-ins within the Console 1 system?
Not currently.

Will UK 4k for Console 1 be released as a separate plug-in, that I can use without the Console 1 system?
No, UK 4k is a Console 1 product only.

When will Console 1 be available for purchase?
After summer of 2013.