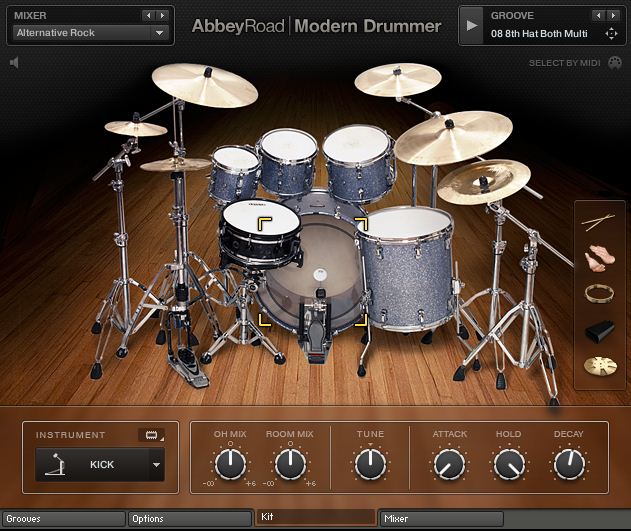 Just a brief word or two about these splendid kits that come as part of the Komplete 8 Ultimate package.

There are now 4 Abbey Road kits, each recorded as the name suggests, in the famous abbey Road studios down in London. It goes without saying that the kits are well recorded and offer a truly authentic sound, but I’m just going to explain a little of what makes these sounds so usable.

Basically, if you’re looking to pinpoint a musical moment in time, there’s a kit for you.

The Abbey Road 70’s kit comprises  two highly sought-after vintage kits, each with a choice of two snares, deliver two highly distinctive 70s drum sounds. The Open Kit is a Ludwig Vistalite Tequila Sunrise from 1972 with the big, roomy sound of classic rock. The Tight Kit is a vintage 1970s Premier model with the tight, dry, punchy sound that was popular throughout the 70s. 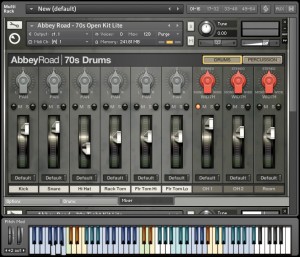 Into the 80’s and the The Black Kit, recorded in Studio Three, is a vintage Yamaha 9000 from the mid-80s – one of the most recorded drum kits in history.

The Chrome Kit is a Slingerland Magnum fitted with single-headed concert toms – very fashionable during the 1980s.
Snares include Ludwig, Gretsch, Slingerland and Pearl models. And no 80s kit would be complete without a full set of Octobans (Think Stewart Copeland) – melodically-tuned tubular toms that were popular among many of the decade’s top drummers.

Recorded in Studio 3, the Sparkle Kit is a contemporary Pearl Reference kit with a tight, disciplined sound for modern pop, ballads and all-purpose use.

The White Kit is a Drum Workshop Collector’s Series kit from the mid-90s. A maple kit, tuned low for drive and edge, and recorded in Studio 2.

So, armed with the proper kits and sounds, you can now set out to record some authentic drum parts.

The Mixer Section provides spot-on control over the mic levels on each drum, plus overheads, stereo room mics and any other specialist mics used during the recording process. The Mix Presets give a completely professional sound, and provide a perfect starting point for detailed tweaking.

Each snare provides faders for top and bottom mic, plus adjustable bleed level. Here, ‘bleed’ refers to how the rest of the kit rattles the snare wires — raise the bleed level for more realism.

Each drum has its own effect chain with a selection of routing options. All the updated ABBEY ROAD DRUMMER instruments include a top-qualitystudio EQ – a uniquely musical 4-band EQ with switchable fixed-bell curves on the low and high bands, plus adjustable Q settings on the midrange.

A powerful compressor adds presence and drive to your drums without blurring the detail. And it’s not just for bus compression – this studio compressor is available on each of the mixer tracks.

There’s a Transient master to  emphasize attack to make a drum hit harder, or shorten the resonance tail of a drum that rings too long. Bring drums to the front of the mix or smooth out spiky drums without touching the levels, and a Tape Saturator which by simulating the natural, harmonic compression of analog tape, adds a pleasing warmth to your sound. And pushed a little harder, it delivers a smooth, organic overdrive.

Finally a Convolution Reverb— 30 high-end impulse responses ranging from small rooms to big halls, for extra space and depth on your drums.

Now, once you take the combination of some beautifully recorded drums, and some very competent effects, you’ll find you are able to lay down effective, believable drum tracks that sit well in the mix and enhance your music in a way that just wasn’t possible a few years ago. 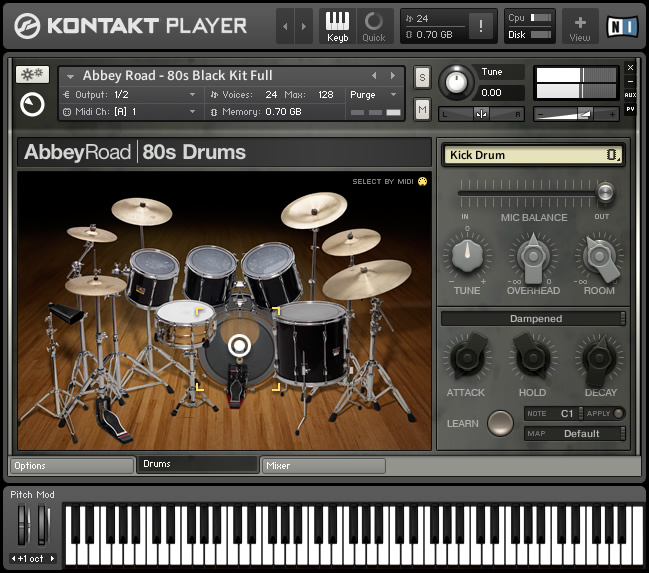