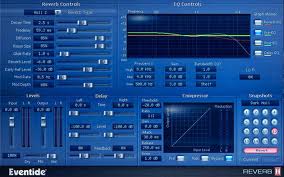 Following on from our Compresser settings piece, here’s a quick look around the terms associated with Reverb.

Reverberation  is a component part of the sounds we hear every day.
Its basically the sound thats left after the initial sound has disappeared.
Some people describe it as echo, but in fact, Reverb is a collection of echoes one after another that gradually die away in time. Many of us have been inside empty old rooms, or baronial castle halls and have heard the sound of reverb created naturally by walls, ceiling or roof. Indeed anyone who’s spent time in caves or catacombs will recgnise the eerie sound of a LONG reverb time.

Types:
When you come to use a reverb unit or effect within your DAW, you’re offered various types of reverb. e.g. Hall, Room or Plate. (A plate reverb is a device invented to simulate reverb and uses a metal plate and a spring).

Sizes:
Room sizes are the first step in creating a natural effect for your music.
If, for example, you’re asked to create the sound of a string quartet, it’s reasonable to assume that the players would gather in a room big enough at least for them to sit and play comfortably. However, we know from history that the heyday of string quartets was around the end of the 18th century,and we associate the sound of them with affluent houses with presumably larger rooms to allow a small audience, so……your choice might be influenced by these facts.
Conversely, a quiet softly spoken vocal, would benefit much less from a large roomy reverb and much more from an up close sound that made it seem as if the singer was singing into your ear. Again, these thoughts will influence your decisions.

Decay or Time: The decay is the length of time that the reverb lasts.
Obviously, the larger the room, the longer the decay time will be, but there are other factors to bear in mind, such as dampening within the room (i.e. an audience soon cuts back the natural reverb of a hall)

Dampening:
By judicious use of low and high frequency dampening, its possible to refine the reverb sound even more. The cave we talked about earlier, would have lots of natural low frequency rumbles whereas a normal room has very little. A room with curtains and a couch and carpets will absorb a lot of high frequencies and consequently sound a lot ‘warmer’. You can use the dampening settings to simulate these effects.

Density or Early Reflections: In actual fact, when the ear hears a sound with reverb, there is a moment between the actual sound and the wash of reverb which contains a lot of information. This is known as the early reflection, and a lot of reverb units give you control over it. Basically if you bang a drum near a wall in a large stone hall, you will hear a lot of early reflections before you hear the reverberation, and good use of this parameter can make things sound very realistic indeed.

Wet or Dry: This is simply the ratio between the amount of direct sound and reflected ‘reverb’ sound.

In general, ‘low’ sounds like bass or bass drums dont benefit from reverb, and indeed are probably better left clean where possible. The low frequencies ‘flood’ easier and will soon become boomy washes of unintelligble reverb. In the same vein, most vocal parts dont need too much reverb or the words are lost (this is where pre-delay can be useful..)

Reverb can be an incredibly creative tool, and as such is always the ‘go-to’ solution when a sound seems to be lacking a litte bit of ‘something’, however, you’ll find that the best producers and engineers take a lot of time and thought over which reverb’s and times to use within a mix.

There are many ways to skin a cat, or so the saying goes. When it comes to mixing down your music each style and genre has a multitude of do’s and do not’s that can help

So, along comes another controller! Ahh but……… Arturia’s BeatStep offers a new degree of functionality and performance for a portable pad controller. BeatStep is highly versatile, capable of triggering clips in such applications as Ableton

Congratulations to our own Pete Gardner on reaching the cover page of the prestigious Sound on Sound magazine! Pete has been a contributor for a while now, but this month, he has put together the