RME come out swinging with a new highend digital card. The RME HDSPe MADI FX promises 390 channels of digital audio which we reckon puts it well into the realms of broadcast users or those recording live sound at some rather epic concerts.

So what do RME have to say about this new interface?:

The RME HDSPe MADI FX features 390 audio channels! Three MADI I/Os – two optical and one coaxial – are accompanied by one AES/EBU I/O and one analog monitoring output. To complete the feature set, a Word Clock connection and four MIDI I/Os were added. The complete technology and connectivity are highly integrated into the smallest possible amount of space – typical for RME. Only one PCIe slot is required on the motherboard, plus one free slot opening on the case.

To guarantee RME’s unique low latency performance with such a huge amount of audio channels, the RME HDPSe MADI FX introduces a newly developed modular Hammerfall Pro Audio Core. The high-tech core will process three times as many channels as the channel count of the previous MADI flagship, while actually reducing the system load and enabling ultra-low latencies down to 32 samples on modern computers.

A sophisticated new efficiency technology will automatically deactivate currently unused channels, so that they require no processing power or bandwidth. A simple stereo playback will not require any more performance than from a standard stereo audio card – despite the use of a professional multi-channel system with almost 400 channels.

The new core technology is accompanied by a special version of TotalMix FX, which allows using the enormous channel count in an efficient and practical manner. The addition of numerous performance optimizations ensures that the 4096-channel mixer of the MADI FX responds just as smoothly as its 1800-channel counterpart in the Fireface UFX. A new and faster DSP allows for a greater number of EQs and compressors.

An innovative new layout of TotalMix enables ergonomic handling of the enormous number of channels. A special option makes it possible to visually hide unused channels. Complete “Hide setups” can be saved at any time, and switched with a simple mouse click, for example between the channel view of the drum mix and the full band setup.

The 192 kHz RME effects engine allows latency-free monitoring with numerous effects like EQs, Compressors, Reverb, and Echo rendered directly on the hardware of the card, independent from the DAW software in use.

The integrated TotalMix matrix conveniently allows the use of the card as powerful MADI router. Unlike most other router solutions, each channel can be routed individually – even with separate level settings for each routing. The unparalleled flexibility of TotalMix can turn the most exotic applications into practical reality.

RME’s unique Seamless Redundancy Operation uses the cards’ 3 MADI receivers to provide professional users with state-of-the-art fail safe operation. In SRO mode the card operates as single MADI input device, recording up to 64 channels. As soon as the current input fails the audio data received from one of the other two inputs is used. The audio data is not interrupted when switching to another input – and the card can use not only one, but two more sources for redundancy. No relocking and synchronization to a different clock source is required, and the interruption caused by the external failure is minimized to a few samples.

The card also features SteadyClock, RME’s active jitter suppression and the unique professional meter and analysis toolbox DIGICheck – including EBU R128 metering – as well as nearly identical operation of the card under Windows and Mac OS. 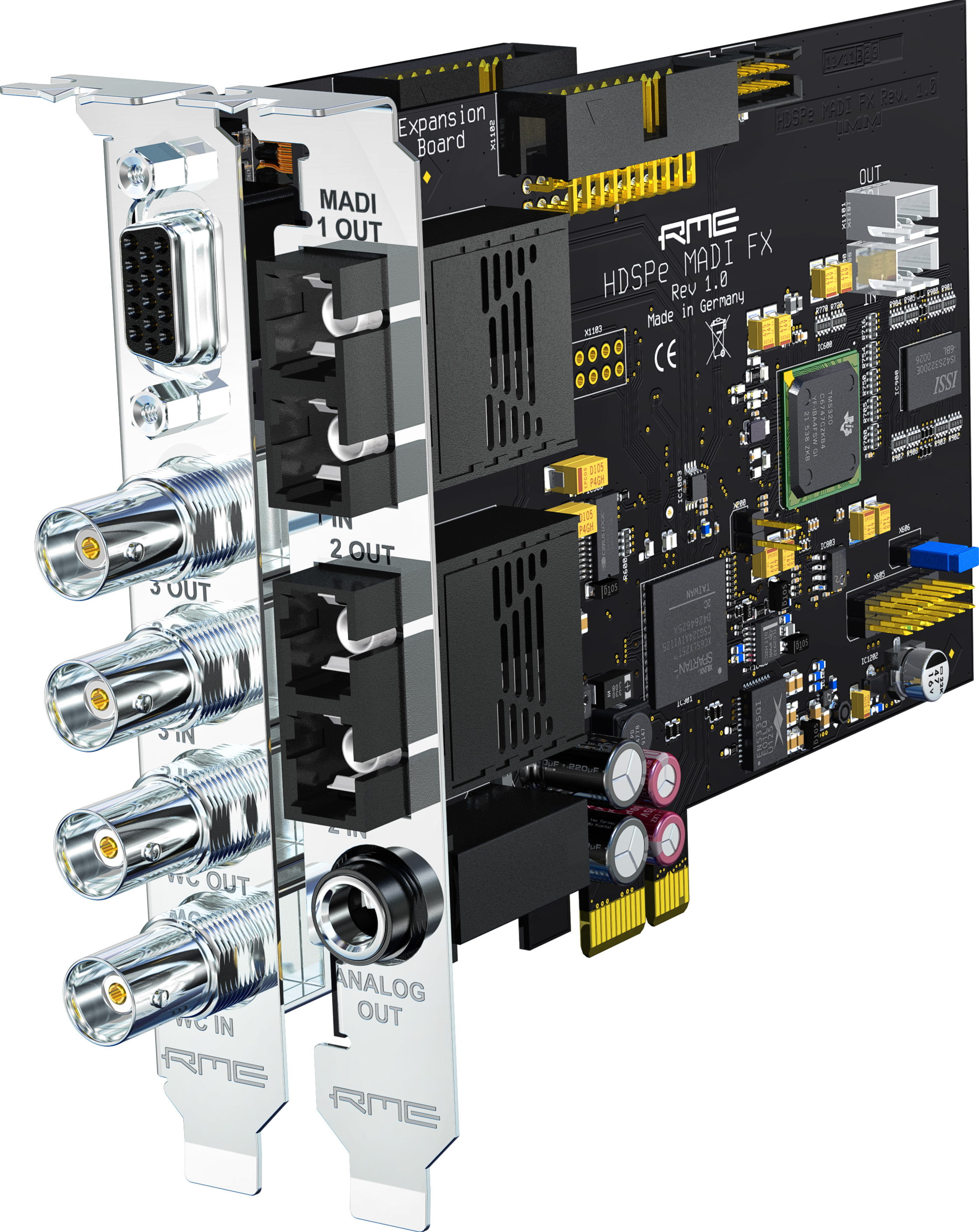 All settings changeable in real-time

Jitter: < 1 ns, internal and all inputs

Jitter sensitivity: PLL operates even at 100 ns Jitter without problems

Comes with DIGICheck: the ultimate measurement, analysis and test tool

The Universal Audio Apollo is first to the plate with a thunderbolt interface, although it is an optional extra, they have managed not to make this just an audio interface, but actually combine it with

Last year one of the more interesting peices of kit released into the market place was called simply the Focusrite VRM Box where the VRM stands for “Virtual Reference Monitoring”. We like this solution as