Analogue summing has become a de-rigour process of high end audio production, with the likes of the SPL Neos console leading the charge. SSL have taken this concept with Sigma and are the first to have designed a thoroughly modern take on it

For optimum digital to analogue conversion at maximum bit rate, the outgoing signal should leave the interface as close to 0db as possible. Every 6db (approximatly) quieter than zero the signal is, it loses a “bit”, so if your pad sound peaks at -24db, then you actually lose 4 bits of audio data!.

There is also a large movement that prefers the way that audio sounds when mixed in the analogue domain, instead of being digitally combined by exporting inside the sequencer. Many engineers prefer this method, citing more “Warmth”, “Space” and “Depth” to the mixes. Now obviously, this wont make much difference (in fact, it would undoubtedly be negative) with a £100 soundcard, but this can be the icing on the cake to the likes of high-end RME,  Lavry,  Apogee or Lynx conversion owners.

Now, where you sit on the whole summing debate is up to you, but where SSL have hit the jackpot with Sigma, is integrating digital level controls from the sequencer of the analogue channels from your sequencer. This “best of both worlds” approach, coupled with a legendary analogue signal chain produces an extremely forward thinking way of utilising modern studio workflow with classic analogue sound.

We are proud to unveil Sigma, the remote controlled analogue mix engine, at Musikmesse 2013 (Hall 5.1, Stand B.73). Designed for the DAW user that seeks the legendary big sound of an SSL console while retaining the convenience of working in the box, Sigma is a unique analogue mix engine in a 2U rack unit, that is remote controlled using MIDI via Ethernet using a DAW or an iDevice compatible software interface. Using proprietary MDAC control technology first featured in our Duality and AWS studio consoles, Sigma’s 100% analogue summing engine can be driven by automation data created within your DAW of choice. Sigma features 16 flexible input channels which can be individually switched between being mono or stereo for up to 32 channels at mixdown. There is accurate front panel LED metering for all channels. There are two stereo mix busses with dedicated outputs for convenient printing of stems back to the DAW and individual stereo insert points to facilitate implementation of parallel compression. Each input channel also features an individual direct output. Mix Bus B can also be injected into Mix Bus A for final mixdown.

An Artist and Studio monitoring section provides a Monitor and Headphone output. The Main monitor output has Main and Alternative connections to accommodate 2 sets of monitors. A comprehensive switching matrix enables selection of your monitor source. A large front panel rotary control uses a push-select mechanism to determine whether it adjusts Mix A, Mix B, Main Monitor or Headphone levels. There is also a Talkback input with adjustable Dim level. Control and switching of a wide range of functions including; monitor level and source, inserts, talkback, sum B>A and mono check, can all be achieved using any standard MIDI hardware control surface. A MIDI learn feature makes setup simple and easy. A pair of user assignable dual action push/hold buttons on the front panel or a foot-switch can also be assigned to the same collection of switching functions. Sigma uses MIDI over Ethernet for control and to connect to a cross platform software interface which provides additional control and setup capability. The software interface enables Sigma to be remote controlled using an iDevice. 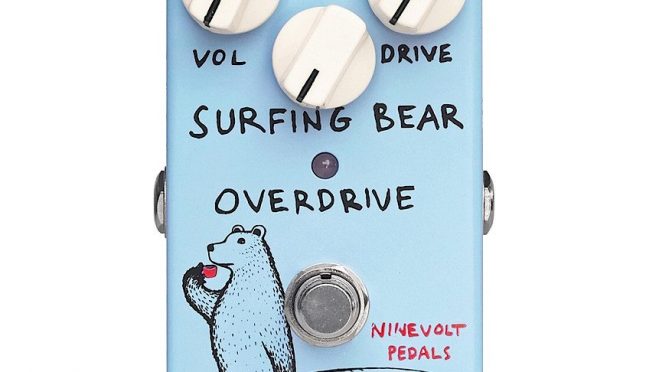 Nine Volt Pedals have already been on the scene for a while but having had their Surfing Bear Overdrive pedal on my board for the past few months, I thought it’d be worth a shout

Fresh from the Novation stable comes their newest addition in the diminutive yet fully featured Launchkey Mini. The Launchkey Mini is a compact mini-key controller / instrument for iPad, Mac and PC featuring 16 velocity